The Redención 228 folder from Chaves American Made Knives is based on his popular custom Redención, but at a mid-tech price. The 228 is a slightly scaled down version, but it still maintains it’s overbuilt, beefy framelock heritage. Features a stonewashed bronze anodized 6Al-4V titanium frame lock with milled hole pattern. The 3.25″ S35VN steel blade sits on caged bearings for smooth deployment. The classic Chavez skull pocket clip adds the perfect amount of edginess, rounding out the look and feel of this fantastic knife! 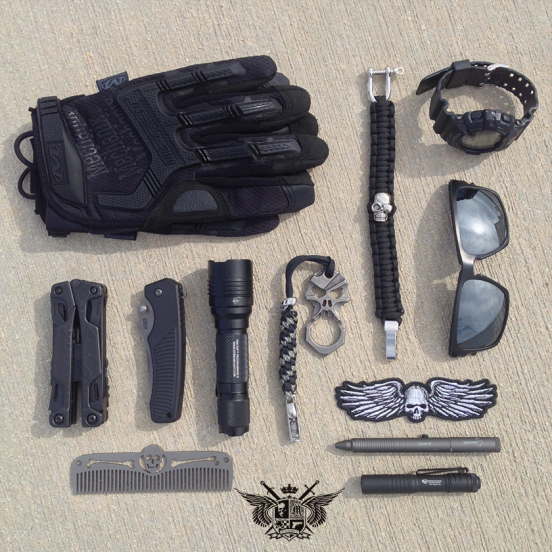 January 9th 2015: In the post I feature some great gear from Streamlight, Oakley, HTM Knives, Boker and more.

Please click on the links below for more information.

Pocket notebooks are something that, it seems to me, are becoming more of a “thing” again. Whether or not it was just me being unable to find them early in the 2000s, or them not existing in large quantities at the time, I don’t know. Still, I seem to find newer, and possibly better, pocket notebooks all the time, like the Rhodia 3×5 48-page 80g notebook I stumbled across at my local bookstore.

The color of my notebook is black (it can be orange), with orange lettering printed on, making it look like the Rhodia premium pads, but it contains regular, stark white, 80g Rhodia paper. My particular book is a graph ruling in a light purple that is customary for the brand. I quite like it, but prefer a light blue for graphs. The 3×5″ size makes the book small and convenient to put in any pocket. Being a…

Visiting with the Happy Yellow Rhodia

Just because it’s been a long time since I posted any peeks into my art journal.

Attending the first ever Colorado Pen Show in October: 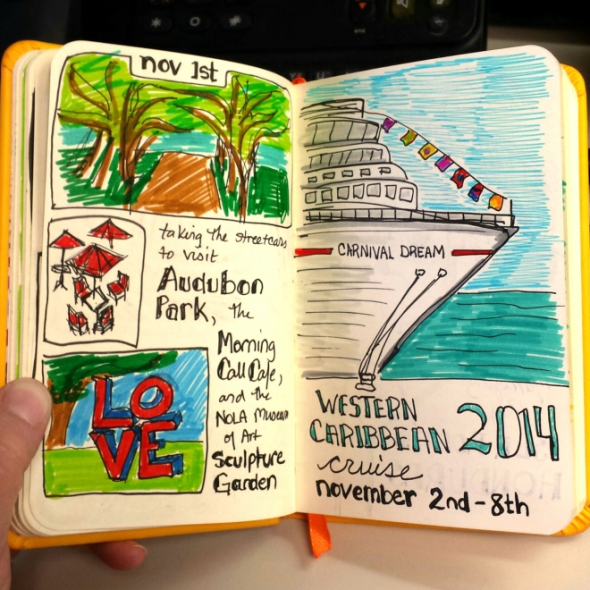 Spending time on this beach in Honduras:

They’re finally here! And they are gorgeous… 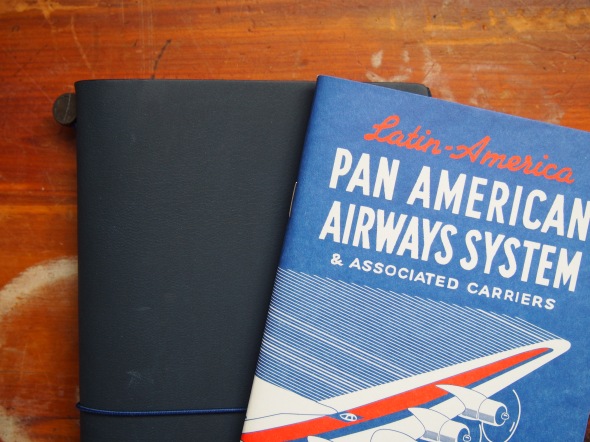 The blue leather is beautiful, and I can wait to start seeing photos of how the leather is wearing in. The paper covers on the accessories are also really nice – they have a vintage, retro kind of look, which of course I’m all over.

We got our shipment in, but the news is grim. We didn’t get as much as we were hoping for in this shipment, but we will be getting more.

The demand has been very high for these, and we’re as disappointed as you in this small shipment, but we will be getting more in May, June and again in the fall. We’ve pre-ordered a good number from our distributor, and he has assured me that we will be getting significantly more than what we have currently received. I think it may be that the demand in Asia took out a…

Too early to go to work so I dropped in at Tesco. They’ve had Moleskine notebooks in for a while now, but they’re now all half price to clear, which means they’re more in line with TKMaxx pricing.

I walked past and ignored them, then after deciding to buy a pen I bought the XL soft cover lined Moleskine. Which pen?

It’s the Parker IM Chrome rollerball. I don’t have a rollerball, and it was half price too so why not?

It’s a little flashier than I’d normally go for to be honest, but it goes nicely with the black IM fountain pen I have. Came with a black ink refill and a gift box, inside a bigger box, nearly half of which was empty. I guess they use hte same boxes for soe of the larger gift sets.

I don’t use a pen that much at work…

I went to visit friends that live in L.A. recently and we visited various examples of extraordinary architecture. It was a short trip but we achieved to visit around 20 buildings during my visit. Normally in architecture tours I try to sketch at each stop, but for various reasons I just drew in some of the building that captivated my inner designer. BE WARNED!! The weather in California helped to take beautiful pictures and also helped to feel comfortable drawings buildings from outside, so you are going to see a lot a perspective drawings. I also were trying new equipment. I recently bought a moleskine updated sketchbook and I decided to take a break from my fountain pen and sketch with .7mm pencil and a muji .38m pen.

I’ve been asked a bunch recently about this knife, so here are some details on it.  It’s a Boker Plus Anti-Grav. The blade is 3 1/4″ in length and is made from super sharp ceramic. The handle is made of carbon fiber, which provides not only incredibly little weight, but also outstanding stability and elegance. It includes a pocket clip, lanyard hole and features a frame lock mechanism.  Great everyday carry knife.

This is a comparison between two 1xAAA  flashlight that is small enough to go in a jean pocket for EDC. I owned both of these flashlights, I got the FOURSEVENS Preon 1 at first and then lost it during a trip. Now I own the Thrunite Ti3, and I’m much happier with the Ti3.

Here are photos of the two flashlight beside the same knife (Spyderco Cat) and ring. The Preon 1 is slightly longer (0.2″). 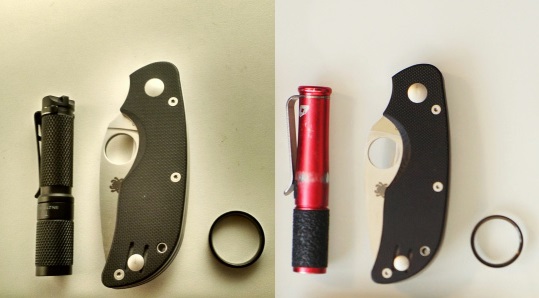 Forewarning, I’m not a flashlight geek who deals intimately with lumens, candela, flux, throw…I care about ease of operation, construction, and having a solid low and high setting for brightness.